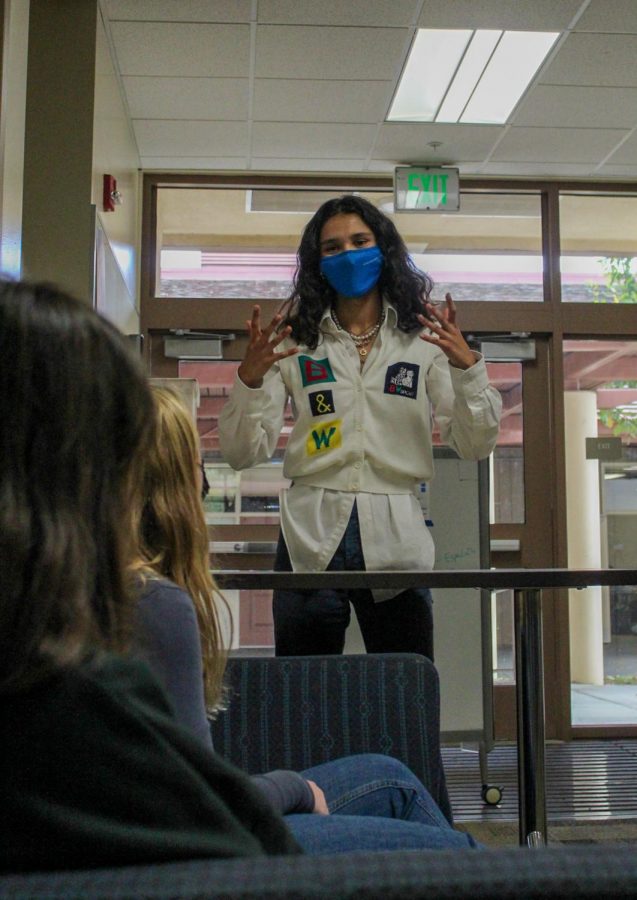 Activist and junior vice president Ines Legrand talks about her efforts with the ASB menstrual product plan and her excitement regarding the new state bill. Photo: Anushe Irani.

EMPTY, reads pretty much every menstrual product dispenser ever; almost as if they were empty to start. The wall dispensers at Palo Alto High School are no exception.

To end this seemingly universal narrative, caddies filled with pads and tampons began to appear in various women’s and all-gender bathrooms across campus this year.

Why weren’t the metal wall-mounted boxes being used instead? The design of those boxes requires a quarter to be inserted to dispense product, rather than providing them for free. Additionally, the keys to open these dispensers are missing, so they have not been stocked in years

But, all of that is in the past thanks to a new state law being cheered on by campus activists who had been fighting to get period products in campus bathrooms for years. Asked about the spirit of ASB’s idea being realized, Legrand expressed excitement.

“I’m really thankful that this law has been passed, I think it definitely helps just like solve, well not solve, but like moving towards fixing a lot of the issues that are widespread in just like not having access to menstrual products,” Legrand said.

California, along with other states, recently passed a bill requiring public schools to provide free menstrual products to their students, according to the Washington Post. Menstrual Equity for All Act of 2021 (AB-367) requires all public schools and universities to stock menstrual products in all women’s and all-gender bathrooms as well as a minimum of one men’s bathroom, citing equal access to education. It is also the first law that includes universities — CSUs and community colleges, but curiously not UCs.

The law goes into effect next school year, but implementation is happening now — but why? Before AB-367 became law, Paly’s Associated Student Body (ASB) had worked on a plan to provide free pads and tampons in school bathrooms, in summer and the first half of the semester.

“We think menstrual products should be at the disposal of everyone,” ASB board representative Micaiah Acosta said. “Menstrual cycles aren’t a choice for anyone.”

It would have been difficult for ASB to pay for and maintain the plan, as it didn’t technically fall into their jurisdiction. Funding for menstrual products should not have to be taken out of designated money for student activities.

“That’s something the district should be providing,” Steven Gallagher, ASB adviser, said. “I mean, to tell you the truth, I’m surprised it hasn’t been [provided].”

In October, Palo Alto Unified School District (PAUSD) took over the initiative after a complaint came from the Paly site. Their implementation plans were already in action when AB-367 was passed shortly after.

Principal Brent Kline experienced the implementation of products at his past school, Santa Cruz High, and said that Paly would be in full compliance with the law.

“Period products should be free. This is really an equity issue, and fighting against such inequality in any possible way is absolutely necessary”

According to Jerry Berkson, assistant principal of operations, Paly’s sourcing and supply for menstrual products is well underway and supplies should arrive soon.

“​​So we did a walkthrough a few weeks ago to check on bathrooms for various reasons,” Berkson said. “One was to check out which women’s bathrooms had the dispensers and which ones had free dispensers versus — because we used to charge, can’t do that anymore.”

Since then, they have ordered new dispensers for the district to replace the metal wall-mounted boxes.

“We’ve been rolling since,” he said.

“It’s kind of like, ‘make sure we have toilet paper now’. Right?” Balcita said. “I mean, just the feminine products should have already been stocked in there.”

Some bathrooms require stocking more frequently than others, though. For example, Balcita said that some days he will fully stock a bathroom like the Media Arts Center (MAC) bathroom and even just two days later, there wouldn’t be any products left.

“For students that maybe would take more than one or two products at a time, the odds of that student needing those products is a lot higher than maybe administration would think,” Josie Jones, Director of Sales at Aunt Flow — a company that specializes in supplying period products for businesses and schools — said. “Typically, my response to that is if you’re taking product, it’s probably because they need product.”

Period poverty — the inability to afford menstrual products — and equal access to education are some of the issues cited by AB-367. Equity was also a motivating factor for ASB.

“Period products should be free,” ASB junior vice president Ines Legrand said. “This is really an equity issue, and fighting against such inequality in any possible way is absolutely necessary.”

Another concern prompting activists to call for free menstrual products was the pink tax, which refers to the markup on many products marketed towards women; and the sales tax, which is intended to be for ‘luxury’ items.

One study by the Consumer Institute, a nonprofit organization dedicated to independent product testing, found pink-taxed products can cost up to 50% more for simply cosmetic differences. This adds up to a staggering $1,300 a year for the average woman.

Menstrual products are also taxed as non-essential items, when they are necessary for basic hygiene. In California, the tax on menstrual products was repealed in 2019, but it remains in many other states.

Affordability and equity are tenets fueling the goal of creating accessibility to free products everywhere for Aunt Flow.

The goal for the law is that the funding for menstrual products will help supply those who cannot access them, not toward product waste — but inappropriate use of the products is already a problem. Plastered on walls, stuck in sinks and even squirreled away behind toilets, the menstrual products have been misused at Paly, Balcita said.

“With most schools that we talked to, we also recommend, if not a full dispenser in the men’s restrooms, also doing smaller display boxes that still have products available for any trans students, or non-binary students to be able to access products when they need them.”

Disappointed, he said that he would like to see the products be used but in a manner befitting their purpose.

“Be able to use one [product] and not two and just kind of toss the other one back so because somebody else can use that,” Balcita said. “So I like to see it be used in that kind of manner, like, a little bit more of a respectful manner.”

“With most schools that we talked to, we also recommend, if not a full dispenser in the men’s restrooms, also doing smaller display boxes that still have products available for any trans students, or non-binary students to be able to access products when they need them,” Jones said.

Balcita, however, expressed worry about potential misuse in the men’s restrooms specifically.

“I mean, yeah, we can put it in there,” he said. “But it’s gonna be a disaster. You know, because it’ll be all over. You know, if the creativity comes out, and then all of a sudden, we have 3-D artwork on the wall.”

Looking forward, Legrand said she is pleased with the implementation of menstrual products and hopes to see it be more widespread in the future.

“I think administration has been taking steps, they’re putting products in a lot of bathrooms, though not all of them, so just being able to like move towards like having all those, especially in nonbinary and boys’ bathrooms is really important, and I’m really excited to see that change,” Legrand said.