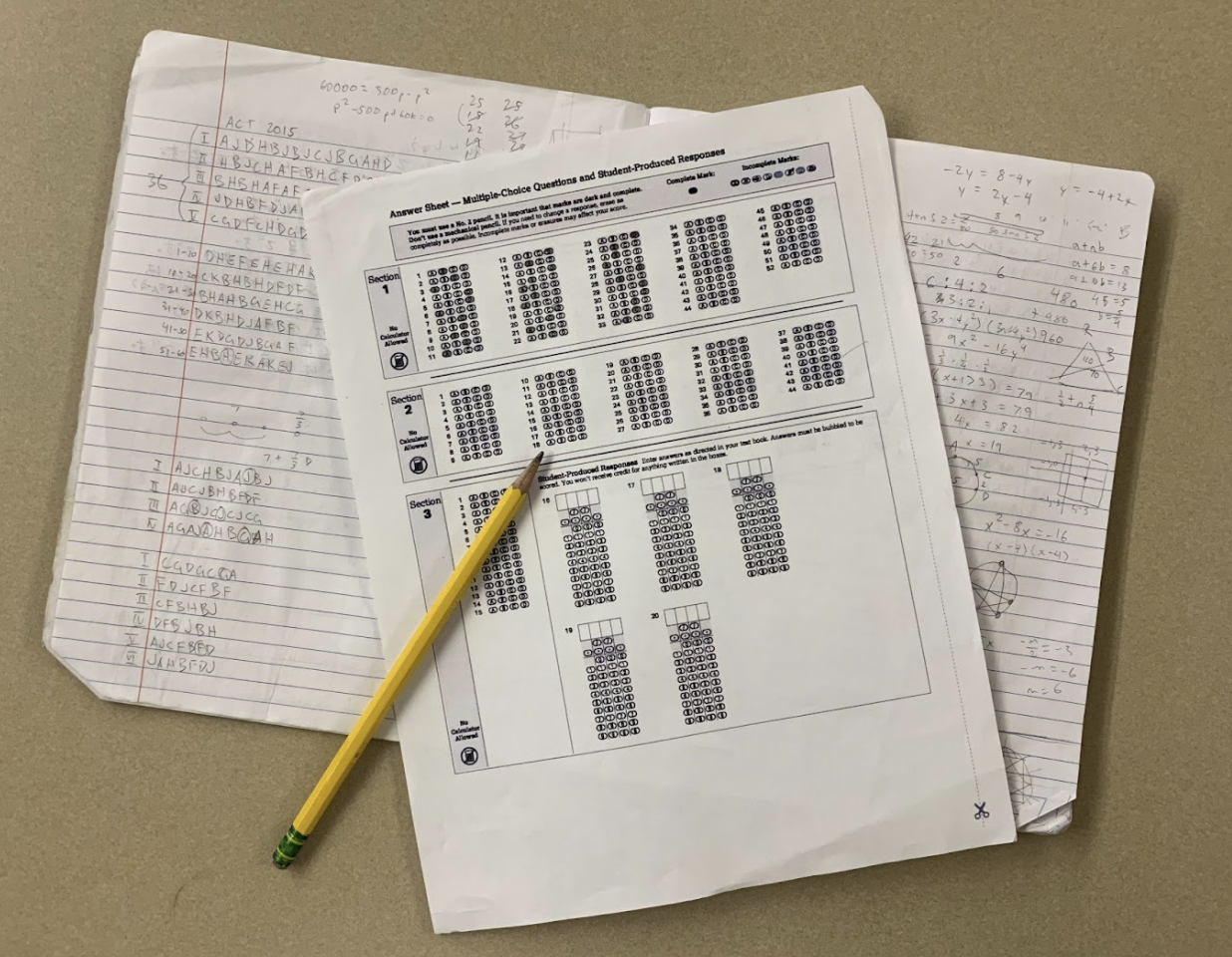 Pencil In Hand – Students taking the ACT and SAT spend months preparing for the test in some cases, but with new test-optional and test-blind admissions policies, some students are not as prepared to spend the time they once might have. (Photo by Neil Rathi)

Pencil In Hand – Students taking the ACT and SAT spend months preparing for the test in some cases, but with new test-optional and test-blind admissions policies, some students are not as prepared to spend the time they once might have. (Photo by Neil Rathi)

Is standardized testing still worth it?

Getting totally engrossed in the passage, one Palo Alto High School senior reads a passage on tardigrade proteins in the SAT while trying a new reading strategy he had learned four nights ago.

Senior Matthew Cao said he only started intensely studying for the test less than a week before his Oct. 13 SAT.

“I definitely found myself looking at the clock way more than I should have, and at one point nearing the end of the [grammar] section, I found myself spending nearly half of my time just looking down at my paper and back up at the clock to make sure that I wasn’t about to get cut off,” Cao said.

Cao is one of many students who have been spending time studying for standardized tests such as the SAT or the ACT.

Over the pandemic, two-thirds of US colleges have gone test-blind or test-optional for the 2021-22 college admissions cycle, according to FairTest. According to Paly college advisor Sandra Cernobori, who has access to Paly’s testing averages but not specific scores, students who signed up for standardized testing studied a lot because they wanted an advantage since colleges have gone test optional.

“So, guess what happened to the test scores — it’s through the roof,” Cernobori said. “Like, I called the College Board to make sure it wasn’t a mistake.”

She added that Paly’s test scores were always above the national average, but the pandemic had increased the margin even further.

“You are way more than your test scores and all colleges recognize this, which is why they don’t have a problem moving to optional. They have a lot else to consider.”

Palo Alto High School student Phillip Zheng said he still felt the pressure to take the College Board’s standardized tests despite colleges going test-optional. Zheng said he believes test scores are still important for test-optional colleges because high scores can only benefit those who do choose to submit scores. He said that colleges’ declarations to move to adopt test-blind policies are not impactful for him since he would have to take standardized tests no matter what, due to family pressure.

Junior Kieran Zajac said he still feels that he needs to prepare for and take tests. He began taking lessons with a tutor over the summer, and now does one full length practice test every weekend.

“I think it’s better to put the time in now so you don’t regret it later because it’s good to have it and not need it,” Zajac said. He took the Oct. 2 SAT and the Paly-sponsored Oct. 13 PSAT.

“Even if I’m applying for colleges that are test-blind or test-optional, then I’ll probably spend more time on school to focus on GPA and extracurricular activities instead of putting more time on the SAT,” Liu said.

According to the College Board, with prices for standardized tests increasing year by year, questions arise about the justifications for taking them, especially with the money that some students invest in tutors, preparatory books and additional practice material.

Although senior Angela Hao did take the SAT during the 2020-2021 school year, she said she believes that the importance of standardized testing and the SAT do not justify the price of the exams along with the additional costs of books and tutors.

“You know you’re spending hundreds of dollars for tutors, prep books, hundreds of hours of your time, and in the end you might not even get a good score, because anything unpredictable could happen,” Hao said. “And in the end you don’t even know if it’s actually going to help you because college applications have so many things that maybe they won’t even look at it.”

Cernobori said that for those who cannot pay the price of workbooks or tutors, there are plenty of alternatives available. According to her, Khan Academy and school-offered PSATs are able to help people free-of-charge.

Cernobori said that at the end of the day, test scores are only a small portion of an applicant’s achievements.

“You are way more than your test scores and all colleges recognize this, which is why they don’t have a problem moving to optional,” Cernobori said. “They have a lot else to consider.”