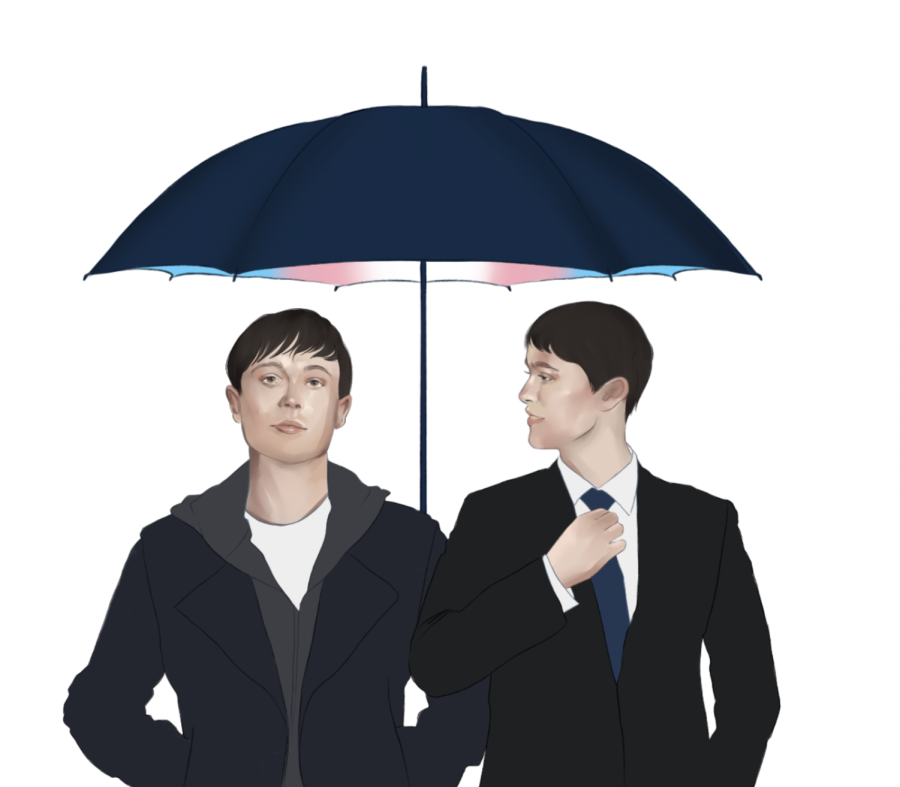 Meet Viktor Hargreeves,” wrote actor Elliot Page in an Instagram post around two months ago.
Elliot Page has starred in Netflix’s “Umbrella Academy,” a science-fiction show about a group of estranged, eclectic siblings with superpowers, since 2019. Page plays the character previously known as Vanya Hargreeves, one of the lead characters in the show.
Since Page’s coming out in December 2020, “Umbrella Academy” fans have wondered how the writers are planning on altering Vanya’s character — if at all — to match Page’s identity. Most assumed that, despite Page coming out as a man, he would still have to play a female character.
However, a few months ago, Netflix announced that Page’s character, now known as Viktor Hargreeves, is going to transition alongside Page in season three, an unprecedented milestone for the trans community.
Paly gender studies teacher Jaclyn Edwards said that she is really excited to see the production team of “Umbrella Academy” support Page’s transition in this way.
“Producers, directors, and so forth are also sending a very political message,” Edwards said. “They’re supporting this person, this actor, who has already proven [himself ] and done a great job … Regardless of how they now identify themselves, they’re still supporting them.”

A lot of times actors and actresses whose sexuality would be bi or gay or lesbian, they would play like ‘ultra macho’ or ‘ultra feminine’ roles to kind of counter or to deflect attention to their sexuality so that they could just keep their job.”

Edwards said that, in the past, a trans actor like Page would have had to go in the opposite direction in order to avoid being “blacklisted” in the film industry. She noted that though there aren’t many historical examples of trans actors, it would mirror the experiences of most queer actors.
“A lot of times actors and actresses whose sexuality would be bi or gay or lesbian, they would play like ‘ultra macho’ or ‘ultra feminine’ roles to kind of counter or to deflect attention to their sexuality so that they could just keep their job,” Edwards said.
Now that such a popular show like “Umbrella Academy” is showing so much support for Page, Edwards said that other closeted trans actors may feel less scared of losing job opportunities after coming out.
“It’s more of also a message that you can be gender-assigned-female and then you identify yourself as male or vice versa, that there’s still a chance for you to do work, your craft, the things that you’re passionate about,” Edwards said.
Despite the recent uptick in legal pushback against trans rights, Edwards said she hopes that Hargreeves is an indicator of a positive trend culturally.
“I’d like to think that the trend will continue,” Edwards said. “And it’s not just this isolated moment of this one person, but that that it continues, which is, I think, a very, very difficult hill to continue to climb because we see so much legislation most recently being passed that is not supportive of transgender communities.”
If this is an indicator of a trend in support of trans actors and trans representation, Edwards said she believes this sort of representation has the potential to shift the public perception of what it means to be trans.
“In order to change the narrative, you have to have that visibility,” Edwards said. “Shows or actors and actresses like Elliot that are coming out is actually a big deal, right. Because it then gives people the sense like, oh, like that’s me.”