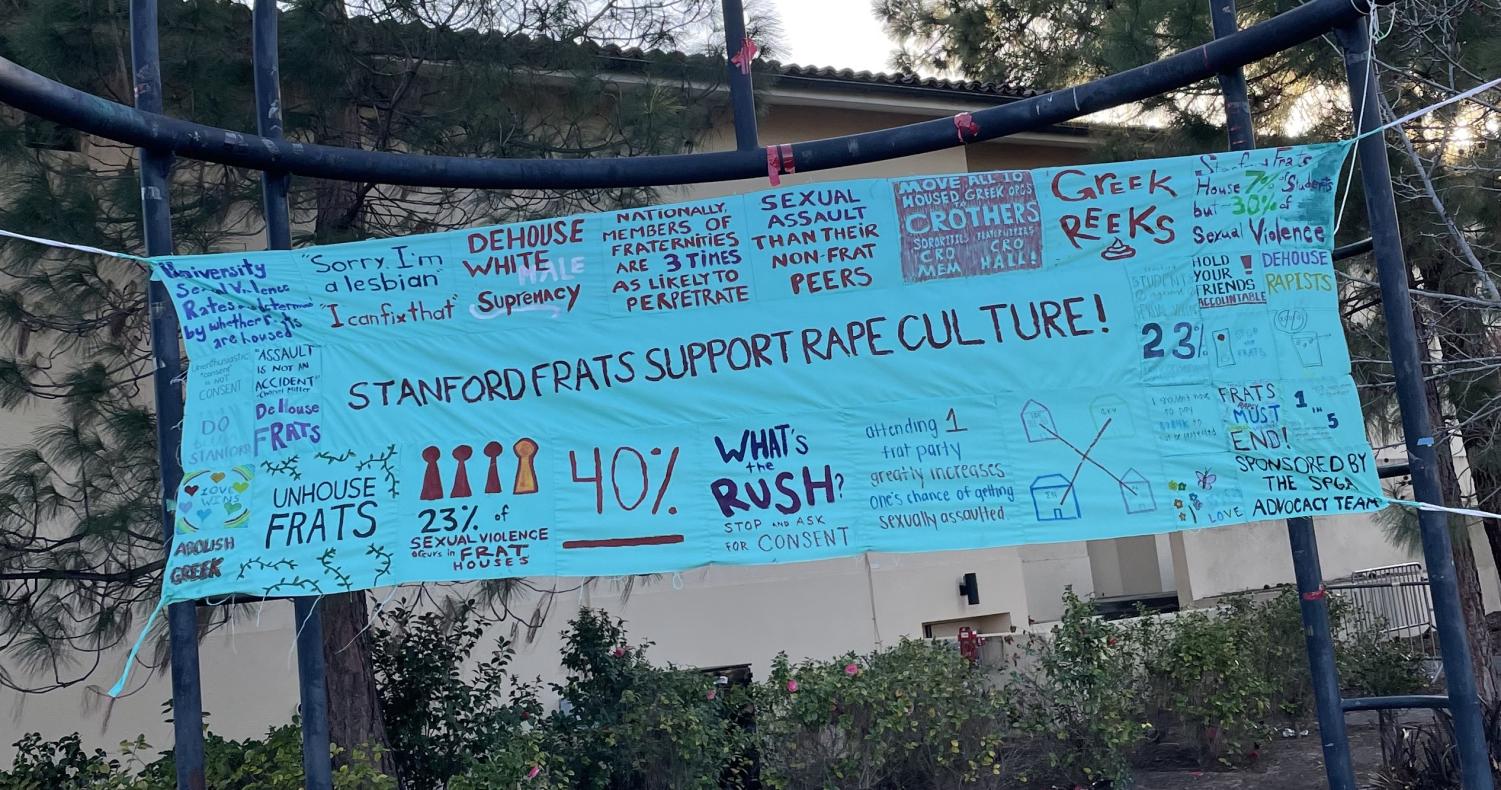 Stanford students created a banner protesting Spring rush season at the university. “The data shows that the longer you’re at Stanford, the more in favor of abolishing and dehousing you are,” said Shawn Lee, a member of the Abolish Stanford Greek organization. (Kyla Schwarzbach)

Stanford students created a banner protesting Spring rush season at the university. “The data shows that the longer you’re at Stanford, the more in favor of abolishing and dehousing you are,” said Shawn Lee, a member of the Abolish Stanford Greek organization.

Mayfield Avenue at first appears to be simply another winding road in the sprawling campus of Stanford University. Tree-lined and tranquil, apart from the sounds of students playing spikeball on the grass.

However, this part of Stanford — unofficially dubbed Frat Row — is the target of a campus-wide movement to decentralize, dehouse, and eventually abolish Greek life at the school.

On Jan. 21, parents of a Stanford student filed a lawsuit against Stanford and the Theta Delta Chi fraternity following the death of the student at a fraternity party in January 2020 due to a fentanyl overdose. The lawsuit alleges that Stanford administration continuously ignored TDX’s violations of university policies, leading to the student’s death.

The lawsuit has come up alongside calls from Stanford students to end Greek life on campus altogether, claiming that fraternities perpetuate sexual assault and harassment, homophobia, racism, and substance abuse.

“Frats and Greek life tend to concentrate a lot of certain people on campus,” said Alex, a Stanford undergraduate and advocate for the abolition of Greek life at Stanford. “They tend to be a lot whiter, a lot more privileged, and not accepting of queer people.” Alex has requested to not use their real name due to death threats received while organizing for the movement at the national level.

Fraternities are dominant parts of social life at Stanford.

“They [fraternities] tend to be a lot whiter, a lot more privileged, and not accepting of queer people.””

“They [fraternities] are kind of the only social scene on campus,” said Angelina Duran, a Stanford freshman. “They’re the source of most socializing and parties.”

This monopoly over social events can cause a variety of issues, Alex said.

“And when you give people in power more power, it can result in a lot of bad things,” Alex said. “So frats at Stanford are tied with increased incidents of sexual assault, lots of incidents of racism, classism … tend to happen around frats.”

This is where efforts to decentralize Greek life from the core of Stanford’s social scene come in. It’s not so much that Stanford doesn’t have other sources for socializing and community, it’s simply that Greek life dominates over these other options within the undergraduate consciousness, according to Shawn Lee, one of the original founders of Abolish Stanford Greek and a recent graduate of the university.

“I think that Greek life is very visible,” Lee said. “The reality is we have armfuls of voluntary student organizations open to all Stanford students of all gender identities, which every day do interesting and important things in the community. … The one thing is that, as an undergraduate, that might be difficult to see at first. And the reason why that’s difficult to see is that there’s this kind of bright flame of Greek life in the middle, sucking out all the oxygen.”

In June 2020, Stanford released data from a campus survey conducted through the Association of American Universities, which revealed several concerning trends regarding the consumption of intoxicating substances and sexual violence.

Sixty percent of students who were a part of Greek life reported engaging in binge drinking one or more times within the two weeks prior to the survey. This statistic is increasingly alarming in conjunction with cases of sexual violence. Sixty percent of perpetrators, and 74% of victims reported consuming alcohol prior to the incident.

Additionally, 14.5% of undergraduate women in sororities at Stanford reported having experienced unwanted sexual contact, compared to 7.4% of women who were not a part of Greek life.

“They [greek leaders] came to the conclusion that the system was fundamentally irreformable due to the constraints that national organizations put on the system. As long as they continued to be Greek organizations, they couldn’t really get to a vision of equity and inclusion that would be consistent with Stanford or human values.” ”

“I think part of the culture with frats and with parties is that there’s often a mixing of alcohol and sexual activity,” Alex said.

Abolishment wasn’t always seen as the answer to these issues, but was a conclusion reached by several Greek life leaders a few years ago.

“Around 2015 and 2016, a lot of Greek leaders [at Stanford] came together to really systematically focus on what could be done to improve the equity of the system,” Lee said. “They really put in a good faith effort … About four years after that first effort rolled out, they kind of came to the conclusion that the system was fundamentally irreformable due to the constraints that national organizations put on the system. As long as they continued to be Greek organizations, they couldn’t really get to a vision of equity and inclusion that would be consistent with Stanford or human values. And so, they really took the lead as Greek leaders themselves to say, ‘Okay, this system is no longer tenable, we really do need to consider that it’s not that the system has bad people in, it is that the system makes good people do bad things. And at that point, the system is more worth leaving than keeping.”

Abolish Stanford Greek (ASG), founded in 2020, builds off of this conclusion reached by those former Greek leaders, and focuses on raising awareness for the negative effects of Greek life on campus, amplifying the stories of students who have suffered as a result of Greek life, and advocating for the decentralization and eventual dissolution of Greek life on campus.

“We [ASG] provide a space for like people who are victims of sexual assault, people who are victims of bullying, people who have been pressured to consume substances,” Lee said. “We provide a space for them to tell stories, [a space] which didn’t previously exist, and sometimes that can be uncomfortable for people but we really feel it’s our obligation to share that and so the community as a whole is really asked to confront what is actually happening.”

The organization primarily advocates for the dehousing, decentralization, and abolition of Greek life through their platforms on social media and through op-eds in the Stanford Daily, in addition to pursuing action through the university’s student government.

The movement’s growth hasn’t been without pushback. As mentioned earlier, Alex took a step back from the organization after receiving death threats.

“Speaking up against existing organizations is always a challenging and risky thing, and I had to take some time off for myself,” Alex said.

However, Lee takes an optimistic view of this conflict.

“Part of a lot of where pushback comes from, to the extent that there is pushback, is people are uncomfortable fundamentally with those stories. … You might interpret this as pushback, but I think of it more as just the beginning of the conversation,” Lee said.

“For us, there’s no compromising on health and safety and individuals’ right to [have] control over their bodies and a safe and healthy existence at Stanford.””

Catie Fee, a sophomore at Stanford and a member of ASG says that the organization’s efforts are increasingly important during the pandemic and the return to in-person learning. Now, rather than just the freshman class participating in the upcoming spring rush season, when students compete to join fraternities, sophomores will be participating as well.

“This year, both the sophomores and freshman classes will rush or have rushed…In a normal year the sophomore class would have already gone through that process and would have already been able to see all of the issues,” Fee said. “The hope is that they won’t have to go through those horrible experiences that so many have gone through in order to understand why our campus would be better without Greek life. The hope is that we can kind of show them through the stories and through all the efforts that we’re making.”

Lee says that abolishing Greek life goes beyond morals — instead, it’s a matter of public health and safety.

“We [ASG] have always said that the reason why this is the right thing to do is that Greek organizations are sites of disproportionate sexual violence and disproportionate mental health issues,” Lee said. “All of these are health and safety harms. And for us, there’s no compromising on health and safety and individuals’ right to [have] control over their bodies and a safe and healthy existence at Stanford.”