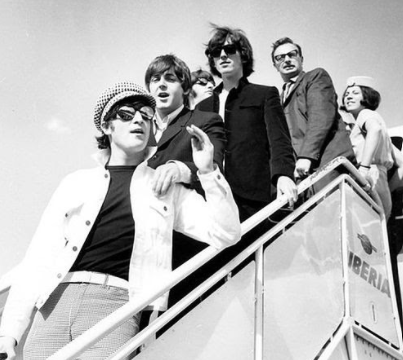 The Beatles pictured in a Black and White photo. Photo by Iberia Airlines, CC BY 2.0

The Beatles pictured in a Black and White photo. Photo by Iberia Airlines, CC BY 2.0

Getting Back to the Truth

How “The Beatles: Get Back,” challenges old, misogynistic claims about The Beatles’ break-up

Yoko Ono broke up The Beatles. This claim has become one of the most pervasive theories surrounding the dissolution of the iconic band in 1970. Now, following the release of the eight-hour documentary series directed by Peter Jackson, titled, “The Beatles: Get Back,” this claim is coming under increased scrutiny.

The relationship between Ono and Lennon was under critique since its beginning in 1968, given that both parties were married at the time. Following The Beatles break up, rumors of Ono’s supposed overbearing nature and attempts to interfere with the The Beatles during rehearsals — causing rifts between members — became commonplace.

Jackson presents footage first captured in 1969 for a documentary directed by Michael Lindsay-Hogg, titled “Let it Be,” in a new light. The story of the breakup is one of inevitability, and one which certainly does not involve Yoko Ono, at least not to the extent to which she has been blamed. The band’s four members, Paul McCartney, John Lennon, George Harrison, and Ringo Starr, are shown to have had a number of existing fissures within their relationships to one another. McCartney often comes off as overbearing, a perfectionist with a penchant for control. Lennon seems irreverent, occasionally mocking the work of his fellow bandmates. Harrison feels as though he isn’t allowed the space to create his own music within a band so musically dominated by Paul and John and even leaving the band for a few days at one point. Starr coasts along, seemingly content to generally stay quiet and in the background.

Now, this isn’t to say the documentary depicts a band constantly on the verge of breaking up. The bonds between bandmates remain undoubtedly clear, and produce some of the most charming scenes within the documentary: those of them joking around together or suddenly bursting into song. You get a heartwarming sense of the friendship, creativity, and love of music that brought them together in the first place. However, the cracks that would ultimately result in the group shattering are evident, and they are all related to the character of the members rather than any outside party. The documentary implies that The Beatles broke up The Beatles, no one else.

“Many have begun to question if the vicious criticism or blatant vitriol spewed at countless women throughout the 20th and 21st centuries might have been laced with a large dose of misogyny.”

Yoko Ono, despite claims of her supposed meddling with the song writing process and band dynamics, remains largely silent throughout the series, present but not involved. She spends her time sitting beside John, almost always drawing or reading a newspaper or otherwise occupying herself quietly. The other members of the band, including Paul’s wife, Linda Eastman, all seem to have friendly, or at least cordial relationships with Ono.

This reframing of Yoko Ono’s relationship with The Beatles is a part of a larger movement currently underway within the cultural sphere. Today, many are beginning to reexamine the way in which famous women such as Britney Spears have historically been mistreated or misrepresented by the media. Many have begun to question if the vicious criticism or blatant vitriol spewed at countless women throughout the 20th and 21st centuries might have been laced with a large dose of misogyny.

“The Beatles: Get Back” breaking down the notion that Yoko Ono broke up The Beatles is a significant contribution to this movement. The issue is that it takes almost eight hours to do it. The idea of editing seemed to remain just that — an idea. Perhaps this was in some attempt to tell the whole story, portray the whole truth of the recording sessions without trying to push any one narrative, to allow for the footage to speak for itself. I suppose in some ways the organic, raw nature of the editing is something I appreciate about the series.

However, it felt somewhat unnecessary to me to include what felt like every take of every song. By the end of the documentary, I never wanted to hear the songs “Get Back” or “Don’t Let Me Down” ever again. While I understand that in many ways the lack of editing allows the truth of the story to come through, that run time did often drag the series down. I can’t imagine anyone who isn’t at least a moderate fan of The Beatles would have a very entertaining viewing experience.

Ultimately, “The Beatles: Get Back” is a unique documentary that challenges old notions about the nature of The Beatles’ disintegration.  Despite its long run time, it manages to keep you watching with its pure charm, and the connections it shows between the band members despite their quarrelling. If you’re looking for something to put on in the background while working, or to help you connect with that one Beatles-obsessed family member, “The Beatles: Get Back” is a solid choice.