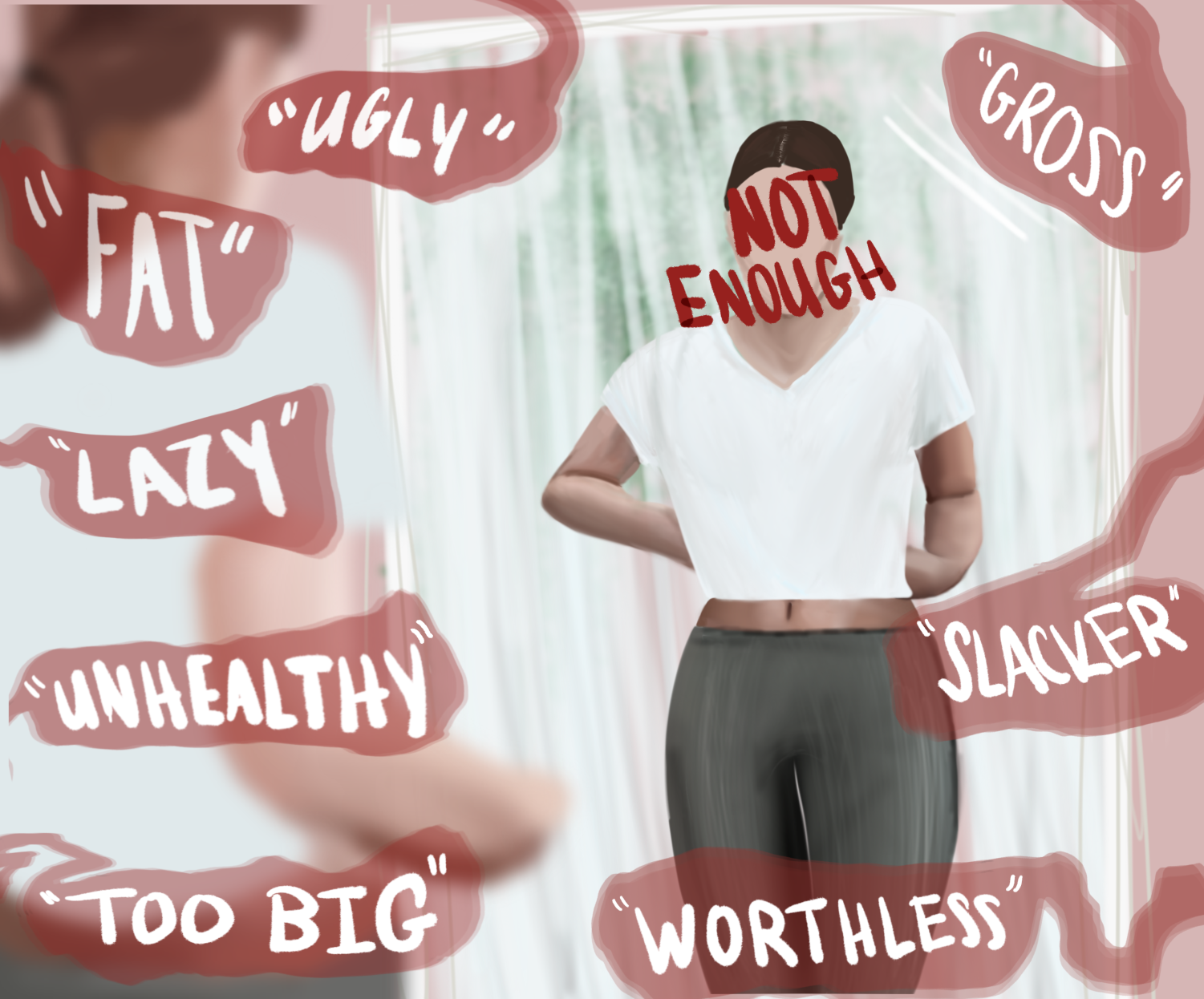 From social media to advertisements, from dieting apps to fitness blogs, diet culture reaches Palo Alto students from all angles. School is oftentimes another way this is reinforced.

According to an opt-in, anonymous survey of 97 Palo Alto High School students conducted by Anthro Magazine, 74.7% of respondents said that they’d been exposed, in some way, to diet culture by teachers, administrators, and/or curriculum. Though most said the impact has been small to moderate, the impact is still there.

Diet culture, defined by the health online news site Very Well Fit as the belief that physical form is more important than well-being, can be reinforced by elements of school curriculum, such as Physical Education and Living Skills, and community.

“I think there’s definitely a culture around eating more healthy foods, because it’s this idea that you don’t want to be obese or like you want to eat healthy,” Palo Alto High School senior Niklas Hagstroem said.

Diet culture is spread in many ways, such as social media. According to the New York Times, many teenagers struggle with comparing themselves to people they see on social media, and the emphasis social media places on fitness and diets specifically harms people.

Teaching about nutrition and fitness is necessary, according to the Centers for Disease Control and Prevention, in order to prevent illness, support physical health, and improve emotional well-being. However, this sort of education in schools can also fuel harmful ideas about bodies and food, according to Eating Disorder Foundation intern Heidemarie Streicher.

“We also see a lot of like attaching morality to foods,” Streicher said. “So saying ‘foods are good, foods are bad,’ rather than just — we in the eating disorders sphere, we like to say — nourishing our bodies, right?”

Physical education can also be a source of problems for students, said Lauren O’Brien, a therapist with training in eating disorder treatment.

“We think about kids in elementary school in which kids get chosen to play certain games, because they appear more physically able, and in which kids sit off to the side and don’t get engaged in movement and are criticized for how they look or what their body looks like,” O’Brien said.

Nikki DuBose, eating disorder specialist, agreed that sports can damage self-esteem by playing into the culture of body shaming.

“It’s still considered normal in sports to weigh kids and body shame those who do not meet the “normal” expectations,” DuBose said.

It’s still considered normal in sports to weigh kids and body shame those who do not meet the “normal” expectations.”

Although diet culture is heavily embedded in our society, it tends to affect already people of color more than others, according to Streicher. Even though people of color are at higher risk for eating disorders, they are less likely to seek treatment due to stereotypes that portray eating disorders as a “heterosexual Caucasian female” problem, according to Psychology Today.

“Some people, some communities, their disordered eating behaviors are not addressed the same way as in other communities they are, which is a disparity,” Streicher said.

O’Brien said this inequality is due to how teaching about nutrition and fitness caters to certain people. According to a statement by Intensive Care Unit doctor and health specialist Milton Mills published in the Ithaca Times, the information and recommendations about nutrition given by the government overlook the needs of people of color.

“We need to teach kids that the food pyramid that we currently see is white-centric, and based on middle class, white eating patterns, and it’s not realistically showing what all members of our schools are eating or even consider healthy,” O’Brien said.

Hagstroem said that there should be more balanced, less processed options at the cafeteria to overcome this disparity. He also advocates for more resources for people struggling with their body image.

“I don’t think there’s a lot of services for people [at Paly] who are overweight … or who feel like they’re being bullied, or who don’t feel happy with their bodies,” Hagstroem said.

Senior Katie Firtch said that, even without diet-culture-trained counselors, Paly can provide more resources for people struggling with body image.

“The most pragmatic approach is to make sure that the current counselors we do have are connected with people who specialize in ED (eating disorders) if a student comes to them and needs that kind of help,” Firtch said.

Hagstroem said that Paly students should speak up more about body image-related bullying, when they see it occuring.

“The deceptive thing about it is that it’s usually friends on friends,” Hagstroem said. “It’s a lot harder for someone else to step in, because it’s sort of almost taken as a light hearted back and forth instead of direct attacks.”

We need to teach kids that the food pyramid that we currently see is white-centric, and based on middle class, white eating patterns, and it’s not realistically showing what all members of our schools are eating or even consider healthy,”

Hagstroem said that there should be more education around diet culture and how to live a healthy lifestyle without restricting or dieting. However, he said it would be difficult to make a big change.

Firtch said that education about diet culture may have the opposite effect. She said that people tend to rebel against the messaging the administration puts out.

“I guess messaging more just like here’s how you can treat yourself better, including ways that you can physically and mentally I guess, stay in touch with yourself,” Firtch said.

One way people can work against the effects of diet culture is to use different language when talking about body-related topics. Streicher said focusing on well-being is helpful.

“Instead of complimenting people’s bodies, compliment their clothing or their style, right?” Streicher said. “And moving away from just talking so much about weight and rather talking about wellness.”

DuBose also mentioned the importance of language when talking about food.

“Kids are very vulnerable to the language that is being used around them,” she said. “Schools should avoid using words like ‘bad foods’ and ‘good foods’ and should focus on teaching kids how to tune into their internal hunger cues, also known as intuitive eating.”

Another way schools or school districts like Palo Alto Unified can help students is to give them positive role models in teachers and coaches, according to DuBose.

“If the coach models a positive body image, healthy relationships, and a balanced approach to competition, the students will be more likely to feel more positive about their own bodies,” she said.

DuBose said that if students were free from expectations perpetrated through diet culture, they would be able to be stronger all around.

“Students wouldn’t feel the need to compete with unrealistic expectations,” she said. “And could focus more on their unique talents and how that can contribute to collective experience.”