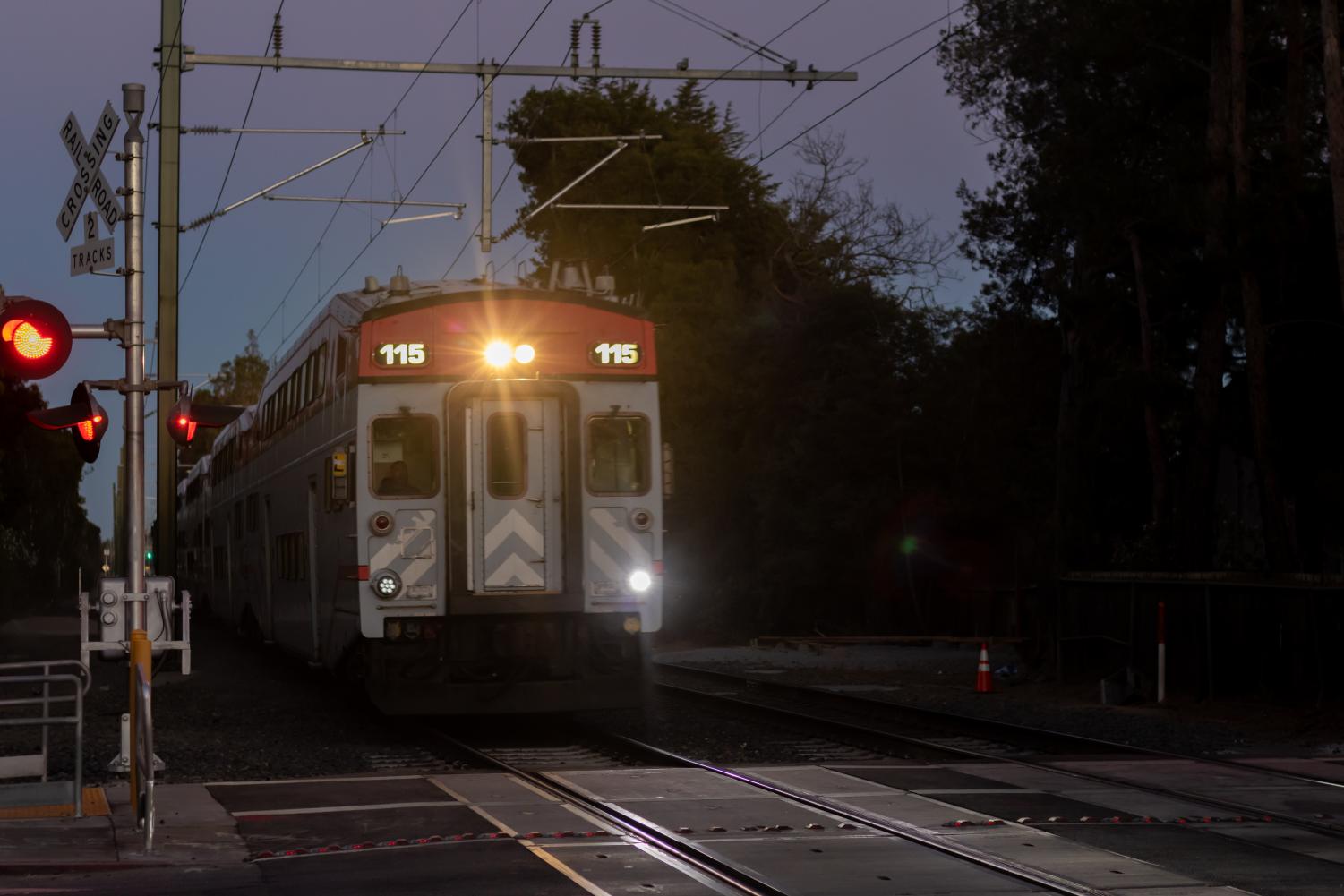 Does a new city council now mean a plan for safe railroad crossings?

There were eight fatalities at Palo Alto’s four grade crossings in which a train struck either a pedestrian or a vehicle according to Connecting Palo Alto, a community-based process overseen by the City of Palo Alto, between 2008 and August 2020. Close calls with the Caltrain at the Churchill railroad crossing are close to home for many Palo Alto High School students.

“The spacing was tight for cars to not get crushed,” Raffle said. “I was driving away from school and the light turned red, and I had to pull into the street to leave enough space for the blocker to come down for the train.”

The railroad creates much trouble for both vehicles and pedestrians because of the awkward intersection between the road and the tracks.

“Mainly, it just seems like a safety hazard, mostly because it’s often unclear when to move forward, and when the crossing arms come down, the train comes so quickly.”

Raffle is one of the many Paly students that have had scary experiences at the railroads.

During the city council elections, many candidates expressed their opinions concerning the possible remedies for this problem. Now that the elections have passed and Veenker, Lauing and Lythcott-Haims emerge as winners, will the city council finally take action?

Palo Alto has four railroad crossings that are all in residential areas. Recently, this has become a hotly-contested topic in recent elections and within several Palo Alto neighborhoods.

Mainly, it just seems like a safety hazard, mostly because it’s often unclear when to move forward, and when the crossing arms come down, the train comes so quickly.”

There have been a few solutions on the table that have been considered for the past few years, including a hybrid underpass, a fully underground tunnel for cars, or a raised track of the train. Some have gained a lot of support while others have been largely dismissed for their price or feasibility.

Ed Lauing, a recently elected member of the city council and current chair of the Planning and Transportation Commission in Palo Alto, stated that although ideally, the issue should be quickly resolved, the city council has yet to come up with a solution that is both feasible and nondisruptive.

For instance, one obstacle to building the proposed underpasses beneath the train intersections is that eminent domain would have to be applied. Eminent domain is the right of the government to use private property for public use.

“We would have to buy and take down 84 homes entirely, and 42 others partially,” Lauing said. “So 130 people would lose their homes to do it. Now, I’m not going for that.”

To avoid eminent domain, Lauing says that the city has to collaborate with Caltrain and obtain vital information such as what technical specs they’re going to use.

“When we know if we have to put in two to four or two or four tracks, we can plan better, and maybe avoid all of the eminent domain,” he said.

Alex Comsa, a former candidate for Palo Alto City Council, raises concerns about the impact on not just houses near the railroad crossings, but also neighborhoods that will be affected by the diverted traffic as a result of construction.

“No one is talking about Embarcadero—you cannot close Churchill and expect the traffic to be directed down to Embarcadero because Embarcadero is an issue as we speak,” Comsa said. “So, Churchill, I believe would have to be started in conjunction with Embarcadero as more of a semi-package.”

There are also environmental consequences of constructing a fully-submerged tunnel.

“The tunnel is not an option since we would have to go under one or two creeks and the creeks would be in the way of the tunnel,” Comsa said.

Although Comsa did not win city council, his views and concerns propose a different perspective for current city council members to consider.

Conversely, Julie Lythcott-Haims supports the viaduct because of its complete elimination of the intersection between the railroad tracks and the road.

“I’m interested in a solution that tries to anticipate future issues and concerns and term solution that will really be proud that we put in place for that reason,” she said. “I think the viaduct is the most visionary solution.”

Although the city council eliminated the viaduct as an option more than a year ago, Lythcott-Haims’s election to city council could mean a revitalization of this plan.

I’m interested in a solution that tries to anticipate future issues and concerns and term solution that will really be proud that we put in place for that reason.”

Due to Paly’s proximity to the Churchill crossing, the Palo Alto Unified School District is also a vocal participant in the discussions of potential solutions.

Lauing stresses the importance of taking small steps and prioritizing the safety of crossings, especially for ones with much civilian traffic like Paly around Churchill.

“Relative to safety, the most important part is to fix the pedestrian and bike crossings…the transportation department should have already done this,” he said.

The initiative to solve this problem has constantly stalled despite continuous federal funding, but with a new combination of city council members, there is an opportunity — and a lot of pressure — to finally ensure the safety of railroad crossings.