Voting for the first time — during a pandemic 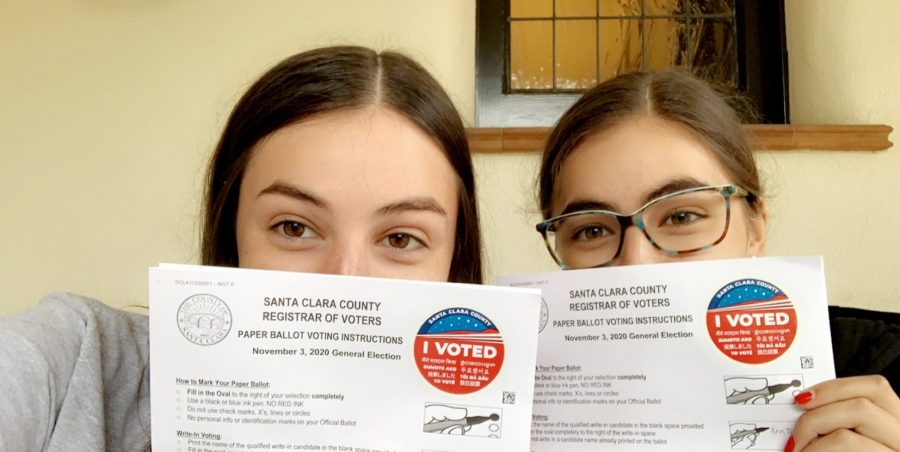 As the nation moves through Election Day 2020, some newly minted 18-year-olds at Palo Alto High School are casting the first ballots of their lives and are eager for their generation to take the reins of American politics.

“Ever since Trump’s election in 2016, and my awareness of the fact that I’ll be able to vote in the 2020 election, I’ve felt motivated to vote,” said Andie Tetzlaff, senior at Palo Alto High School.

Tetzlaff turned 18 in September and is one of many students who have recently become eligible to vote in the 2020 presidential election. According to the United States Census Bureau, there was a 46.1 percent voter turnout for 18- to 29-year-olds in the 2016 Presidential election.

For many of the new voters, casting absentee ballots was a common experience. Tetzlaff said her whole family requested absentee ballots prior to submitting their votes to avoid the long lines at the in person polling stations.

Another senior, Mia Baldonado, also voted by absentee ballot. On Oct. 23, she dropped it off at a ballot box at Rinconada Library. Baldonado said she chose to vote by absentee ballot because it limited the amount of contact with other people and let her vote on her own time.

“It was super exciting to vote for the first time and the process was pretty simple,” Baldonado said.

Senior Sophie Kadifa said she also decided to vote by mail because of the simplicity and the timeliness of the process.

“I was able to vote early,” Kadifa said. “I was also able to talk to my family members about different propositions and had time to deliberate what I wanted to vote for.”

Kadifa explained that the League of Women Voters gave a presentation to her Economics class which included helpful resources that voters could refer to and explained how to vote.

“I was super excited to go through the whole experience of a voting center and since there were no lines, it was not a hassle,” Washburn said. “The polling station was run extremely well and I was in and out of there pretty quickly.”

Some voters have felt that voting in person would put their safety at risk, but Washburn felt safe through the process.

“The poll workers were doing a really good job making sure everything was running smoothly and safely with respect to the virus,” Washburn said.

Whether young people  are eligible to vote or not, they have found ways to draw out eligible voters and get involved in the voting process.

Senior Jonathan Sneh said that his older brothers and his parents filled out absentee ballots and dropped them off at Rinconada Library. Sneh said his family usually votes on Election Day, but this year they dropped their ballots off in one of the ballot boxes instead because they want to limit their contact with other people due to COVID-19.

“I was even planning on being a poll worker, but decided against it because of my asthma,” Sneh said.

Although he is ineligible to vote, Sneh has encouraged others to vote through his involvement in a student-led organization called Vote16 PA.

“I am a part of Vote16 PA and we hosted events about civic engagement and voting on local issues,” Sneh said. “I helped moderate a youth town hall in order to get people talking about local issues.”

Senior Adora Zheng volunteered as a poll worker this election. On Nov. 2, she spent the day at the Mitchell Park Library Vote Center as a greeter, where she assisted people in the voting process to make it as intuitive and smooth as possible.

“I’m not old enough to vote yet, but I still wanted to do what I could to make an impact and help make the election more democratic,” Zheng said.

Whether people decide to vote in person or by absentee, there has been some disagreement during this election about whether absentee ballots are secure.

At many of President Trump’s rallies and at the presidential debates, the president has insisted that mail-in voting is a source of voter fraud and will have a large impact on the results of the 2020 presidential election.

Because of the president’s assertion that mail-in ballots is a source of voter fraud, voter suppression is a big concern for many voters.

“I’m really hoping that voter suppression is not as big of an issue for this election because of its tremendous value for depicting our future,” Tetzlaff said. “This election for some, could be a life or death situation, given the Trump Administration’s policies and values.”

Baldonado said she does not believe that mail-in is a source of voter fraud.

“It [mail-in voting] makes it easier for voters to turn out,” Baldonado said. “You can also track your ballot, so you’d be able to see if it went missing or if something happened to your ballot.”

Tetzlaff doesn’t agree with Trump’s statement either and expressed her distaste for the president spreading misinformation.

“Knowing that Donald Trump has a huge background on not telling the truth and lying,” Tetzlaff said. “ I know that he is just trying to scare voters. I think he is pathetic and cowardly for trying to spread fake news to the general public.”

According to Zheng, a core principle throughout her training prior to working at the polls was maintaining the security and integrity of each ballot, and she pointed out  that voters who were dropping off ballots put them into the ballot boxes themselves.

“A ballot never leaves the voter’s sight, from the time it’s sealed to the time it’s transferred into the locked ballot box,” Zheng said. “There is no method by which a poll worker can tamper with a sealed ballot.”

In the past, the Trump Administration has set a precedent against supporting minority groups, like the LGBT community. Tetzlaff shared how this attitude impacted her feelings about voting.

“As a queer woman in 2020, it’s important to vote for a president who cares for me and my values, and will work towards building a safer America for all, not just straight, cisgender, rich white men,” Tetzlaff said.

Kadifa also expressed why she believes the youth vote in this election is especially impactful.

“The outcome of this election will have major impacts on everyone’s lives for many years to come,” Kadifa said. “It is even more important for younger voters to vote this year because it is our future on the line.”

Baldonado, Sneh and Tetzlaff all share the belief that voting is a critical function of our democracy.

“I encourage all young voters to vote because most kids in our generation aren’t able to vote, so we need as many people as possible to represent our demographic,” Baldonado said.

“I think it [voting] is the most important civic duty, except for being kind to the people around you,” Sneh said. “Go out and vote — it’s how our democracy thrives.”

“I know that every vote counts, and you bet mine will be in there,” Tetzlaff said.