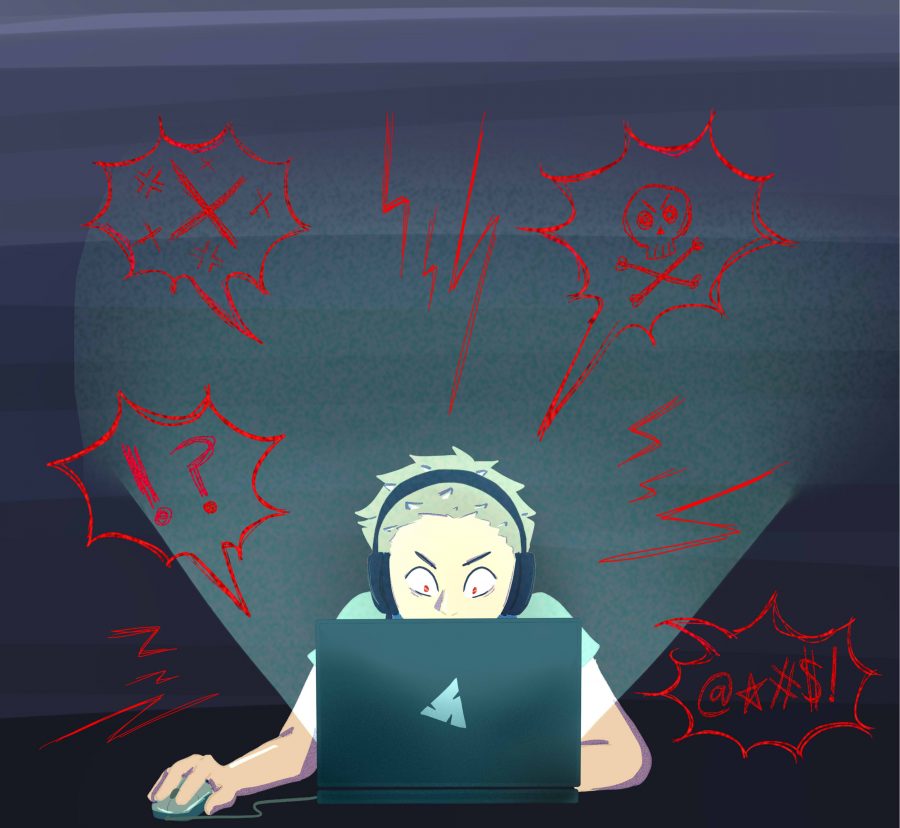 You know the feeling. You’re on your phone, just scrolling and minding your own business. But then you see it. A comment, a meme, something that is just so mean, racist, sexist, so toxic it ruins your day. Now multiply that feeling by 100. Welcome to the darker parts of the gaming community.

Video games have become a formative part of many people’s childhoods. For some people it has become part of their identity. And online, they are the backbone and common interest of an entire community. I am not very involved in the gaming community, but it’s not because I don’t like video games. It’s because of the community itself.

Over recent years, gamers have created a reputation for being angry, childish, and generally toxic. So much so that prestigious news sources such as the New York Times and Washington Post donned headlines such as “In Virtual Play, Sex Harassment Is All Too Real” and “Racism, misogyny, death threats: Why can’t the booming video-game industry curb toxicity?”

Examples of said toxicity go from purposely tripping up a team member in a heat of passive aggressiveness, to screaming slurs over voice chat.  Most of this behavior is found in games that are free to play, online, and ironically require teamwork and communication to succeed. And unfortunately, not all abusive gamers keep the abuse “in-game.”

Of course, not all gamers exhibit toxic behavior. But there is enough who do, driving people away from the community and affecting the rest of the Internet as well.

One of most prominent examples of toxicity in action is #Gamergate, a hateful movement in 2014 that harassed and threatened women of the gaming industry. These women and their loved ones were exposed to violently misogynistic comments and even death threats. Some women were even forced to leave their homes. People who tried to defend these women also got attacked, hacked, and doxxed, which is posting private or identifying information with the intent of harming that person.

These exchanges may seem strange to the rest of us. Why say those things? Surely, frustration over a game isn’t valid justification for anti-semitic, racist, or homophobic outbursts. Even if the person ‘didn’t mean it that way.’

A very popular scapegoat for these widespread  angry outbursts, especially among parents, are the gun-heavy content of many of these games. While the content of said games may or may not attribute to this behavior, there is actually more at work that meets the eyes.

Jamie Madigan, games psychologist and author of “Getting Gamers: the psychology of video games and their impact on the people who play them” points to the human psyche. As he said in an interview with PCGamesN in 2016:

“Deindividuation is a psychological state when you feel like your identity is more part of a crowd than yours individually. … When experiencing deindividuation, we tend to look more to contextual information about the situation and the behavior of other people to inform us as to what to do or what’s appropriate. If we see others behaving badly or if the cues provided by the situation suggest it’s okay to be nasty, then we’re more likely to do that.”

In other words, it can all start with one. One angry, problematic gamer screams slurs across the game chat. He accuses another player of cheating, and blames the other for his team’s loss. The rest of the team is now put in a peculiar situation. They have a choice of either protesting, being a bystander, or joining in.

As more and more people choose to join in, it gets harder and harder to choose the other options. It doesn’t help that these interactions are on the Internet, where all people are given annonominity.

Paly junior and gamer Aurin Dutta says people should be mindful of the difference between acting out online and in real life.

“[It] just kind of stems from like being on the Internet because you don’t have to deal with societal consequences. If you were to do that in real life you’d probably be hounded for the rest of your life,” he says. “ On the Internet its just another said thing.”

“I was playing ‘Rainbow Six’ with a friend, and I accidently shot him in the face. He made certain remarks on me being Jewish.”

However, Kaplan didn’t seem fazed. He kept on playing and continues to be a friend to this person.

“Most people take it impersonally and that’s just how it is.  That’s just part of being in that community, it’s not like the attacks are personal in any way. You’ve angered someone and they react.”

Paly sophomore and captain of the Paly Counter Strike: Global Offence team, Enzo DeMarinis talks about some of his experiences as well.

“I  have friends who say homophobic things [in games] but the people who say that in my friend group are actually gay themselves, so it’s kind of a joking thing.”

Like Kaplan, he seems unfazed. He continues to explain that these outbursts aren’t a reflection of character.

“People do say racist things, but not with the intention of being racist. … It’s not like trying [to] actually be racist.”

This type of language has been so normalized that within the community that those words and behaviors lose their offensiveness and are seen as reasonable expressions of anger.

Fortunately, companies are acting to better reform their user base. Ubisoft, host of Rainbow Six, made it so if it caught someone typing slurs in the chat, it put the player a 30-minute suspension in 2018. The company that hosts League of Legends, Riot Games, has had a team in place to fight this behavior since 2013. Companies including Blizzard, Twitch  and Discord teamed up in 2018 and joined The Fair Play Alliance, an organization that focuses on understanding how toxicity happens, how to handle it, and of course how to end it.

Although an uphill battle,there is a reason for hope. Shortly after joining the Fair Play Alliance, Blizzard reported that abusive chat was down by 15% to 30%. Obviously there’s a long way to go, but it’s a glimmer of hope for the gaming community.

It’s not just the companies that are making an effort; gaming forums like SVG, posting headlines such as “Signs That You’ve Become A Toxic Gamer” and Reddit threads titled “How Can I Stop Being Toxic About Video Games?” Makes it clear that the community itself is working on self reflection and improvement.

Despite all the harassment, the slurs, the anger; there is a chance for the video game community to redeem itself. As companies come down on hate, and we as a community learn to handle and change our behaviors, we can make gaming less toxic, little by little.