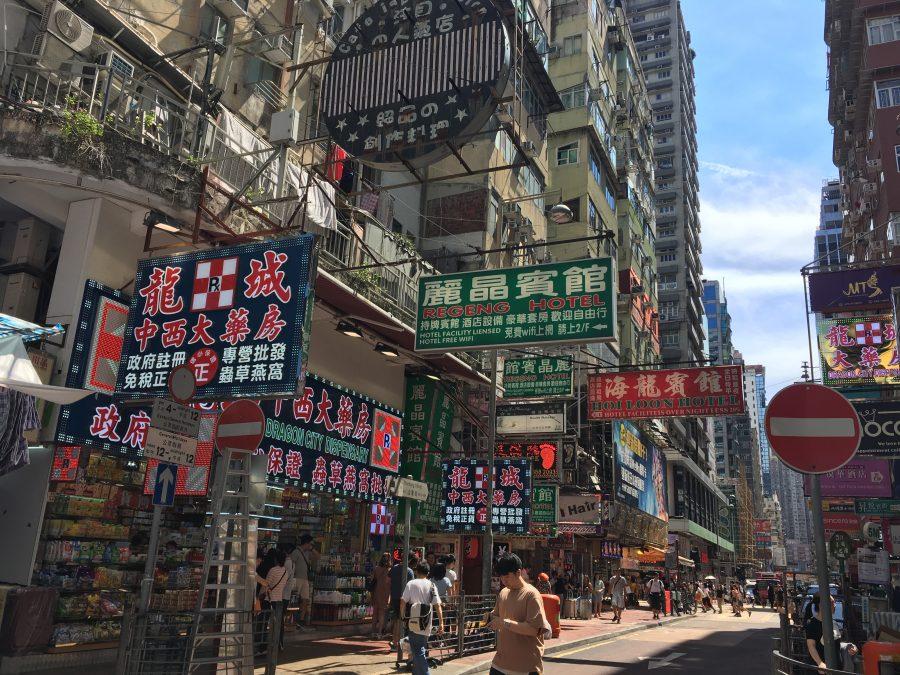 As of when this issue will be printed, the infamous 2019 Hong Kong Protests, originally started to oppose an extradition bill that would allow criminals to be transported to China, will have gone on for five months now. When there is a movement in America, the effect on Americans is apparent. However, when it comes to foreign affairs, the effect is less obvious. The complex impact of the Hong Kong protests hits Bay Area residents 7,000 miles away in ways that regard their identities, emotions and loved ones. Here are just a few words from Palo Alto residents.

“My relatives are quite divided on this. … We try not to talk about it. With the protest five years ago, my uncle didn’t talk for awhile after the protest because of the divide. We try to avoid the conversation, but when it comes up there’s a slight tension because of everyones different opinions.”

“I think both sides have prejudice against each other. I’m from mainland [China] but I’vve been living in Hong Kong for a long time, and I have connections to Hong Kong relatives, even when China was poor. I used to watch Hong Kong TV shows when I was really young so I admired the living style of Hong Kong and the people living there for a long time. … But I think things change … Hong Kong must humble themselves … They should be more humble and appreciate the other side.”

“Some of my friends support China, and we were arguing and somehow we just don’t talk anymore. … We should try to avoid talking about those stuff but it’s really hard to avoid it. Everyone has different views, at school I have a bunch of Chinese friends but I avoid talking about political stuff with them because you know we will get in a fight and we will argue.”

“When I first watched videos of the protestors throwing tear gas back at the police, I felt goosebumps on my neck. But eventually, I got tired of being spoon-fed information twisted by Western news outlets—I have no doubt the state-owned news networks in China are also spewing propaganda as well—because if we are doing such a poor job of safeguarding our democracy, why should I trust the media in its agenda to promote “democracy” in other countries? Most of the articles I’ve read were disgustingly ethnocentric too.”

“I feel like it is a helpless situation becuase I’m not there although I was born there, I’m not living there. I cannot do anything to drive where the movement goes … Because I am a reciever of the news I cannot determine if the news is true or not myself because I’m not in the city. … I worry that my posts will effect my [circle] because you do see companies fire people who speak out publically … My brother works in a sensetive industry [in Hong Kong] so I dont know if my view point will effect him. … The press freedom is effected and also individual safety. The fear is intangible. Theres the intangible pressure on the freedom of speech … I am afraid my opinion will effect my friends and family. … It is self censorship because you predict something bad will happen, you will stop saying something that is truthful.”

— Christy, Palo Alto parent who asked that her real name not be used out of concern that her relatives abroad could be targeted for retribution.

“My grandma lives in Shawtin which is where the triad [white shirts] was at night. Because my grandma and my grandpa are old now, they could be on the street buying something and they can be attacked.”

“There was one time, my mom was going home from work and they were protesting on the street and at the MTR, and so she couldn’t get home. She just stayed at her office for the entire night.”

“If I had to [describe] my heritage I would perfer to be called a Hong Konger. Because now the Hong Kongers are against saying that they are Chinese, they don’t like that.”

“Am I really Chinese or am I Hongkongese? My parents will say “you’re Chinese,” but the people of Hong Kong will say “No, I’m from Hong Kong.” It’s actually quite a big problem because personally I identify as Chinese, so for other people to say “no we’re not part of China we’re our own independant place ” It is really frustrating.”

“If you are talking about the Chinese identity, it is really complicated. My ethnicity is Chinese. But I think culturally, I am a Hong Kong person. … I think everyone globally enjoys freedom and human rights and freedom of speech, I think a majority of the people of the world enjoy that. Actually, if it comes to my identity I am a citizen of the world. Because I connect to lots of people with simular feelings and identities. … We have so many identities that intrically tie together just in the Chinese community or Asian community, in the US … You can see that even though we are Chinese American we are so tied with China. … I think we all have a very profound culture that we all treasure and we feel proud of, so we can never forego our Chinese identity.”

— Christy, Palo Alto  parent who asked that her real name not be used out of concern that her relatives abroad could be targeted for retribution.