The Disloyalty Charge: How Jews have been perceived as disloyal throughout history and how it impacts us today 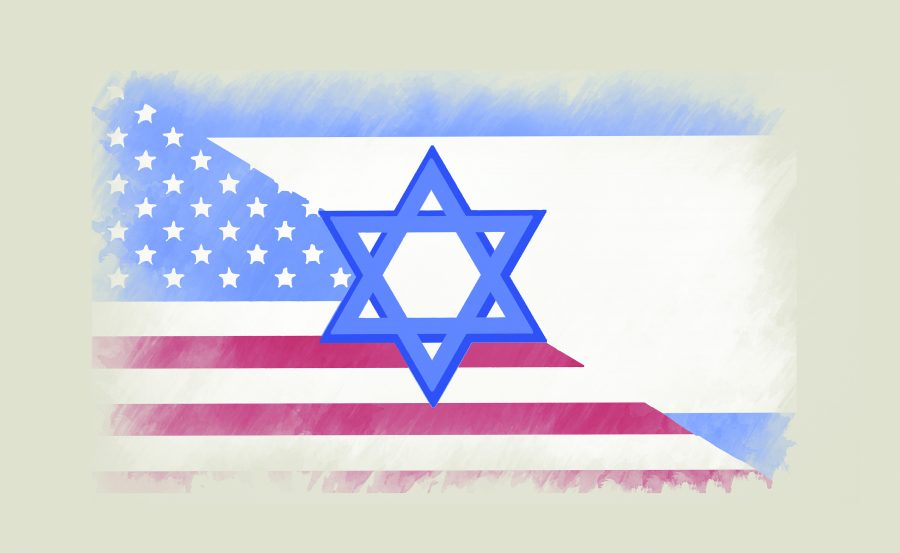 Living in Palo Alto, I haven’t personally experienced outright anti-Semitism. Aside from general ignorance and the errant Holocaust joke, I just don’t have to deal with it. Of course I know people who have, and I know how it impacts my family, but my experiences of anti-Semitism don’t compare to those of people in other parts of the country or the world.

Still, that doesn’t mean the fear isn’t there. People say things, and these things always have the potential to turn into action. Actions like the October shooting at the Tree of Life synagogue in Pittsburg, or the April shooting at Poway in Southern California.

This distant but intense fear is what I feel when I think about what President Donald Trump said on Aug. 21: “If you want to vote Democrat, you are being very disloyal to Jewish people and very disloyal to Israel.”

It’s easy to pass this off as a campaigning tactic or a dig at Democrats. But knowing how the language of disloyalty has been used against Jews throughout history, makes it take on a different meaning.

“The matter of dual loyalty has been a charge laid against Jews for literally hundreds of years,” said Jon Levine, who worked at the American Jewish Committee for over 30 years. “It is done to differentiate Jews from others. The goal of anti-Semites who use this technique — this accusation of dual loyalty — is to make people see that Jews are different.”

“The goal of anti-Semites who use this technique — this accusation of dual loyalty — is to make people see that Jews are different.”

The charge of disloyalty has alienated Jews since biblical times. In the Book of Exodus, Pharaoh justified the enslavement of Jews in Egypt because it was believed that otherwise, Jews would “join our enemies in fighting against us and rise from the ground.” In the Book of Esther, mass genocide was planned against all Jews in the Persian Empire because they were seen as a threat to the king’s power.

Centuries later, during the Enlightenment era, the idea of Jewish dual-loyalty was still being used to estrange Jews, according Jerome Chanes, author o f “Dark Side of History: Anti-Semitism Through the Ages.” It became a belief ingrained in Christian societies, fed by the idea that Jews had a higher loyalty to each other, threatening the Christian countries they lived in. Jews were either forced into sectioned-off ghettos or banned from cities entirely. Although the French Revolution and Napoleon’s sweep across Europe liberated many Jews from these ghettos, the cries of disloyalty never went away.

The accusations of disloyalty reached a crescendo after World War I, according to the US Holocaust Memorial Encyclopedia. Even though a bigger percentage of the German Jewish population fought in the war than almost any other ethnic or religious population, Germany’s loss was painted as the result of Jewish traitors with foreign interests to undermine the war effort. This idea, that Germany’s loss in WWI was a result of Jewish disloyalty, came to be known as the Stab-In-The-Back myth. 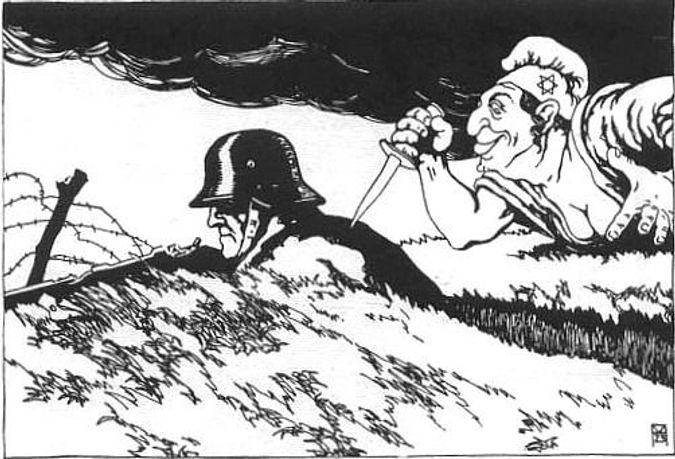 STAB-IN-THE-BACK.  An illustration from a 1919 Austrian postcard showing a caricatured Jew stabbing a German soldier, representing the German army, in the back with a dagger.  Source: the US Holocaust Memorial Museum.

Using the Stab-In-The-Back myth, Nazis began to rewrite German history. The idea that Jews had always been working against Germany caught fire. Conspiracy theories about Jews’ foreign ties and trans-national loyalties became reality in the eyes of the public. Henry Ford even contributed his opinion with his pamphlet “The International Jew,” where he asserted that Jews across the globe were planning for economic world dominance. It sounds outlandish, but it was believed and accepted into public perception.

When World War II started, it was these ideas of loyalty to each other and disloyalty to their countries that in part led to the extermination of Jews during the Holocuast. This is why it’s so scary to see a leader speak about Jews like Trump did in August.

Palo Alto High School senior Kayla Brand shares this sentiment. “I’m slightly paranoid that we’re going to have a genocide,” she said. “I know it’s not going to happen here, but … I am worried about the rise of anti-Semitism in the US, and I am worried that more synagogues will be shot up.”

I know Trump’s comment was just a short remark, a throwaway comment. But that doesn’t change the fear I still feel, realizing the same ideas that fueled the Holocaust are still present today. It’s a chilling reminder that pierced through my Palo Alto bubble of safety. However insignificant it might seem, the fact is that leaders speaking like this has an impact.

“It legitimizes these kinds of [disloyalty] charges if the president talks about dual loyalties in the context of Jewish Democrats,” Levine said. “Leaders of all sorts can make certain ideas acceptable simply by repeating them. […] After all, if the president can say it, it can’t be too bad, can it?”

Anti-Semitism in America has never reached the level of extremity that inspired the Holocaust. It’s quieter, and it’s easier to believe that it’s not a problem anymore. But the absence of genocide does not mean the prejudice is gone. Jews are still being alienated, shot in their places of worship by conspiracy theorists emboldened by comments from those in power, such as the comments made by Trump in August.

Like any other form of prejudice, anti-semitism can’t be completely eradicated. There’s nothing I nor any other Jew can do to convince the public of our loyalty. But we can stop thoughts and feelings from turning into action.