Thank u, next gen: Ariana Grande and HeadCount are motivating a new generation of voters 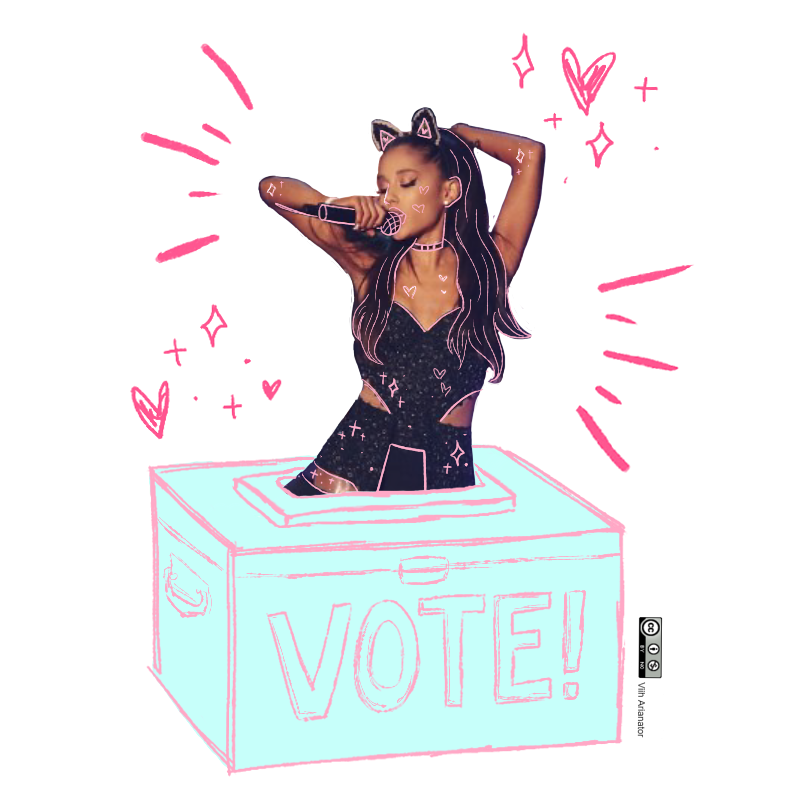 Ariana Grande has capitalized on the hype of her upcoming tour, Sweetener, and partnered with HeadCount, an organization that works with musicians to register voters at  concerts. HeadCount is looking for volunteers to manage registration tables at concerts nationwide.

Voting is one of the rights given to citizens when they reach the age of 18. Voting grants you the opportunity to replace anyone you deem unfit as well as send your favorite candidate into government. This seems like a dependable system of democracy, right? Well, it isn’t, but that’s a whole other article.

Since John F. Kennedy’s election in 1960, the Census Bureau reported that the average voter turnout in presidential elections has been 55.25%. That’s a little more than half of the voting age population, which represents how many citizens are eligible to register to vote.

On the day of the 2016 election, data shows from the Census Bureau that there were 224 million people who could legally vote. However, only 158 million were registered, and only 138 million chose to exercise that right.

Since then, the political climate has strengthened, and the 2018 midterm election was a historic election for youth turnout that saw an 18% increase from 2014, the last midterm election, according to RealClear Politics.  In a generation that votes significantly Democratic, as reported by US News, the impact of this voter turnout surge is obvious: a flip in the House of Representatives and the most diverse freshman class of Congresspeople in history.

That being said, there is still a long way to go. As the 2020 presidential election draws closer, that same generation, including high school seniors and most juniors who couldn’t vote in 2018, have the potential to build on that momentum in 2020.

An effective and easy way to increase voter turnout is organizing or working a voter registration drive.

The closest HeadCount-sponsored stop on the Sweetener tour to Palo Alto will be at 8 p.m. Thursday in the SAP Center in San Jose.

One of the many benefits of volunteering is free admission to the headlining act. If you are planning to apply and are under the age of 18, your parents must fill out a minor volunteer waiver.

“Volunteers below 18 are considered on a case-by-case basis, and must have their parent or guardian complete a permission form,” according to the ‘Volunteer FAQ’ page on Headcount’s website, which also indicates that the voter registration table will operate from the time the doors open to the set change prior to the headlining act.

The website also emphasizes there’s a possibility that the volunteers will meet the headlining act. If Grande doesn’t interest you, HeadCount partners with a variety of artists who can be found on HeadCount’s website.