Students’ opinions on the push to recall Governor Newsom 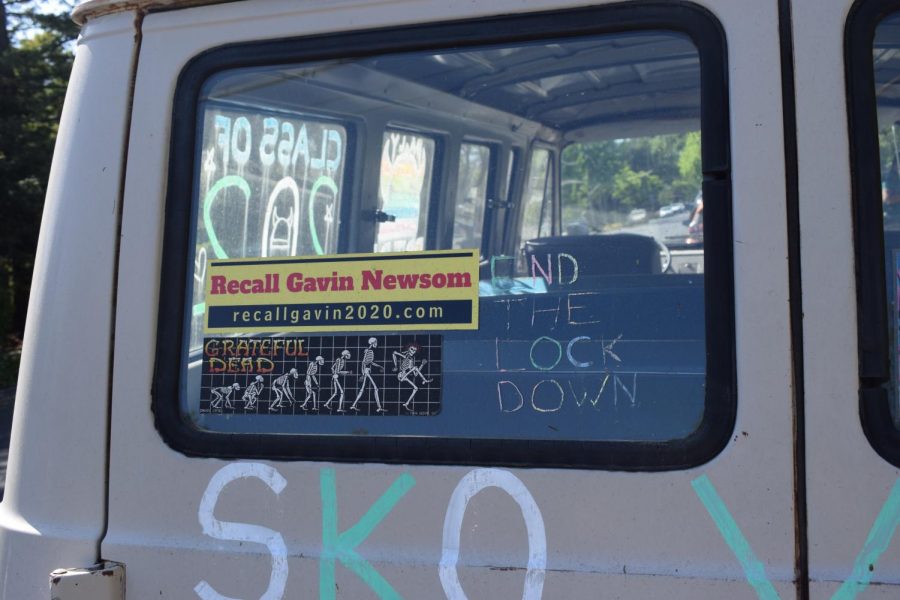 VAN VIEWPOINT. A bumper sticker that declares “Recall Gavin Newsom” is displayed on the van of a Palo High School student. Photo by Anya Lassila.

Governor Gavin Newsom has been under fire from many Californians for his response to Covid-19. In fact, a petition was created by some of the public to recall him from office. Recently, it has gained enough signatures to put his recall on the ballot.

These results reflect the feelings of California voters, but what do Palo Alto High School students, including some new voters, think about the upcoming gubernatorial election?

Considering that the majority of the Paly student population is liberal, it is unsurprising that most students oppose the recall effort.

“I do not support this push to recall him because it’s unnecessary,” Paly senior Ben Norton said. “He’s done a pretty good job of managing an unprecedented situation and the reason that many of the people who signed the petition did was because … people are reacting, instead of thinking and then responding.”

“The recall is an effort by the radical right wing and extremely conservative business interests to get rid of a governor who is sometimes hostile to them, and sometimes is at least receptive to their opponents,” Ghosh said.

Sophomore Rebecca Helft has not developed an opinion on the issue yet.

“When it comes to state-mandated policies and how the government responded to COVID, I think California did a pretty excellent job … so … I think the government under his [Newsom’s] leadership did excellent,” Helft said. “However I think, going to the French Laundry during one of those weeks where it was really important that everyone stayed home is … kind of ethically wrong. I don’t think that necessarily means he’s a bad leader but it’s definitely something that isn’t okay and he should have to have some consequences for it.”

A variety of other candidates have thrown their hats into the ring, most of whom are affiliated with the Republican Party. One of the more prominent candidates is Caitlyn Jenner, former Olympic runner and reality television star. Others in the running include John H. Cox (R), Brian Domingo (R), Kevin Faulconer (R), and Doug Ose (R).

Despite the large battleground, none of these candidates appeal to Norton, partly because of their ties to the Republican Party.

“From what I know right now, I don’t think I would support any of them over Newsom,” Norton said. “My political views are more in line with those of the Democratic Party than those of the Republican Party.”

Ghosh agrees with Norton that Newsom is the most fitting for the position. In addition, he argues that the other candidates will not act in the best interest for the people of California.

“All of these replacement candidates are people who either espouse really far right views or have a track record in government of being just run of the mill Republicans, and who do not govern in the best interests of marginalized communities, but who govern in the best interests of wealthy white residents and big businesses,” Ghosh said. “I think all of them are bad.”

Will Newsom be recalled?

Although it is not clear how all students personally feel about the recall effort, they then predicted how the public will vote.

“I think that Gavin Newsom will stay governor,” Helft said.

Norton agrees, but believes that the governor needs to be cautious.

“I do not think that he is going to get recalled, unless he makes some big mistakes between now and the election,” Norton said.