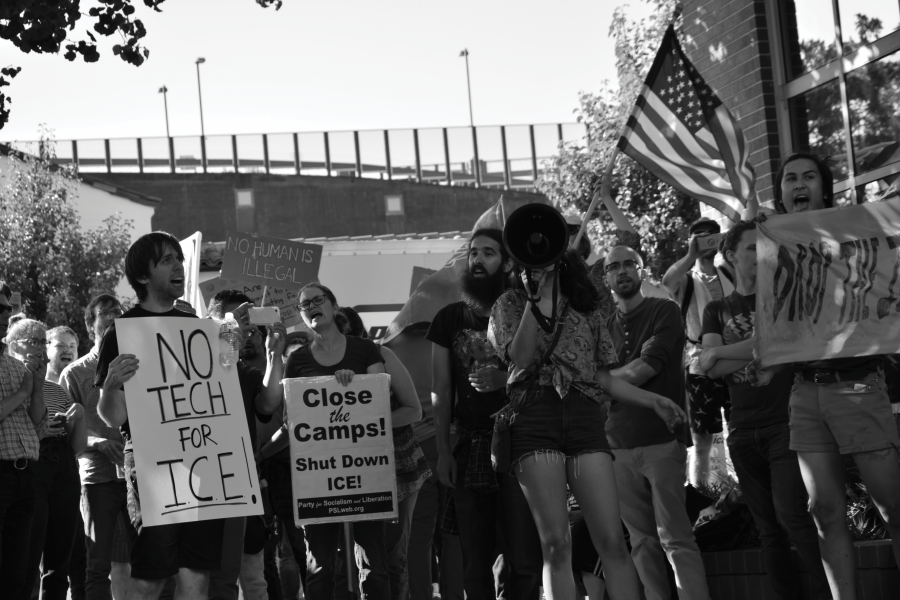 Although it is not unusual to see a crowd of people in downtown Palo Alto on a Friday, on Aug. 30, it was clear that the crowd did not come for a cup of coffee.

Chants like “Palantir, you can’t hide! We charge you with genocide!” roared through the crowd as the protesters marched. With people blasting out notes on their trumpets and banging out rhythms on drums, the noise was reminiscent of a parade.

But instead of a cheering audience, pedestrians worriedly eyed the buckets of red paint carried by the protesters. Rather than floats, police cars tailed the procession and two large moving trucks were stationed right in front of where the protest centered, making sure no one walking on the street could see the protest. This was the third week of protests against software company Palantir’s contract with Immigration and Customs Enforcement, more widely known as ICE.

Palantir is a Palo Alto based software company that over the past years has become a go-to provider for multiple government agencies. In addition to ICE, Palantir also works with the Department of Defence and the United States Intelligence Community.

According to a report by Latinx political grassroots organization Mijente, Palantir has a total of $1.4 billion in government contracts. Palantir’s most recently renewed contract, which would ensure the continuation of its partnership with ICE for another three years, is worth $49 million.

Reports of children being separated from their families and being locked in cages at ICE detention centers have caused a lot of tension. Activist groups nationwide are on the streets and at detention centers themselves protesting ICE. One such organization, the Coalition to Close the Concentration Camps, is the main organizer for the weekly protests at Palantir. The CCCC’s membership consists of multiple different left-leaning groups, all coming together to fight for one common cause: the immediate and complete end of the migrant detention centers. The CCCC believes that Palantir plays a key role in the arrest of undocumented immigrants. 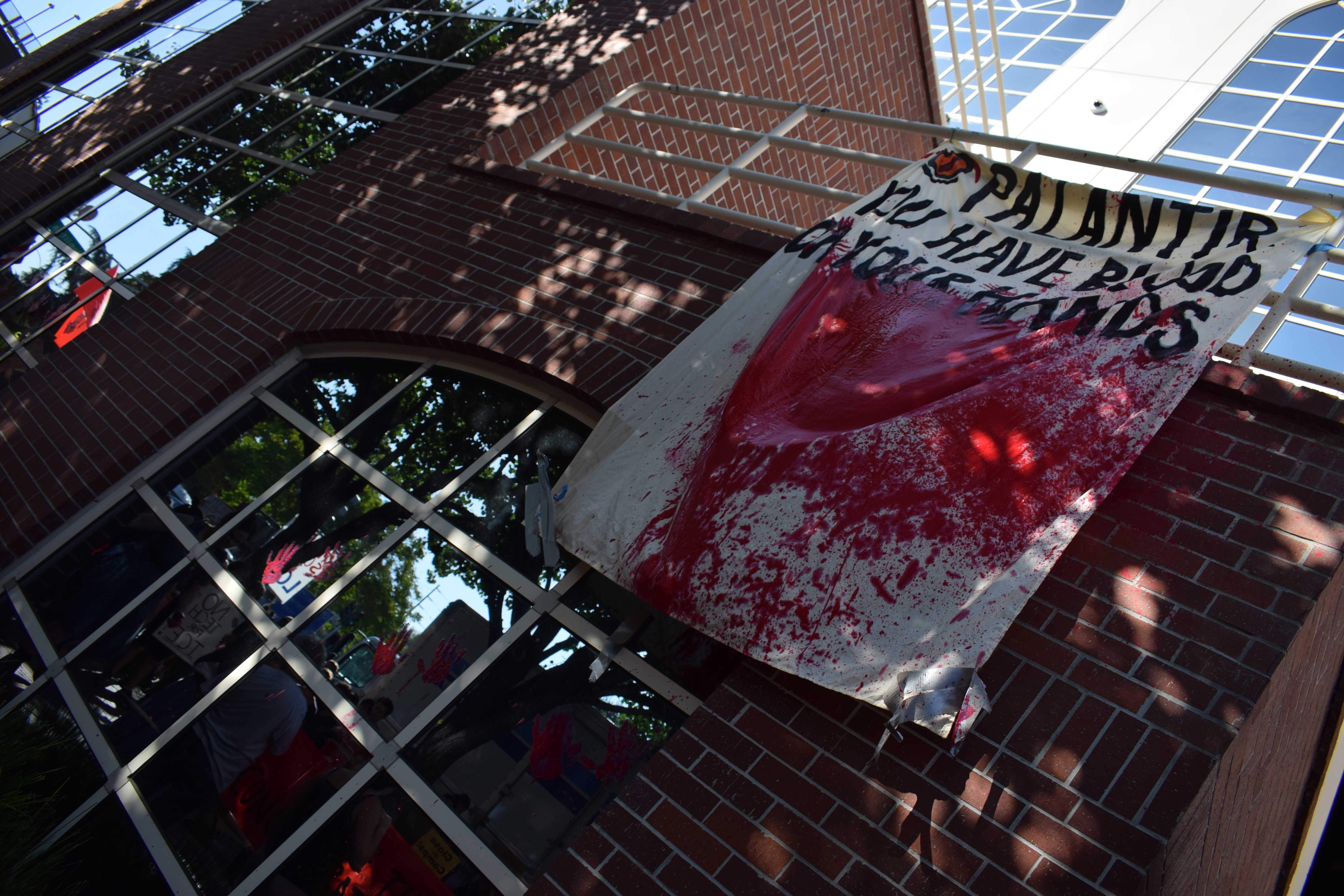 “Palantir is creating software and technologies that ICE is actively using to track and detain migrants,” Dayton Andrews, CCCC and Revolutionary United Front activist said. “We feel that it’s a very important avenue to expose the relationship between the federal government and large tech companies.”

Under the contract, Palantir would continue to provide ICE with data software which is used to find the workplaces, phone numbers, immigration history and even family members of undocumented immigrants, according to the Mijente report. This information is then used to plan raids where ICE officials arrest multiple illegal immigrants, sometimes hundreds at a time.

“We started out with a seven to eight week campaign protesting for them to not renew their contract with ICE. … [Palantir’s] mass doxxing of migrants makes it easier for ICE to terrorize and deport migrants. … We stand against it. We are disgusted with their actions.” Michelle Schudel, member of the CCCC and the Party for Socialism and Liberation said. “We demand that Palantir does not renew their second ICE contract this November and that their CEOs will be taken off the board.”

To achieve this goal, the CCCC hopes to catch Palantir’s attention through picketing.

“A lot of stuff we do with Palantir is, we believe there’s a basis to mobilizing enough people so that we can ultimately begin systematically disrupting the work that they do,” Andrews said. “Our strength and ability can go on the offensive, against these institutions, against these companies, against these policies. It can only be strengthened by mobilizing more and more people.”

Despite public outcry, Palantir refuses to budge. Alex Karp, CEO of Palantir, even defended the company’s actions this September in a guest column he wrote for the Washington Post. “What is worrisome is that some Silicon Valley companies are taking the power to decide these issues away from elected officials and judges and giving it to themselves — a deeply unrepresentative group of executives living in an elite bubble in a corner of the country. … I don’t believe I should have that authority,” Kard said.

The CCCC continues to rally in front of the Palo Alto headquarters every Friday in hopes of creating change. However, the protest against Palantir is not just limited to the streets. Around 200 Palantir workers themselves confronted Karp in August in a signed letter about the issue, according to the Washington Post. Also, students from universities such as Stanford and MIT have pledged to not work for Palantir unless they cut off their relationship with ICE, as reported by Business Insider.

Despite this resistance from Palantir employees, Andrews says it is not enough to consider their efforts successful. “Our successful campaign would be a way to get thousands of organizers and activists in just this area alone, when there are millions and millions of people nationally who can and should be working in solidarity with migrants in this country.”