Individuality can have costs 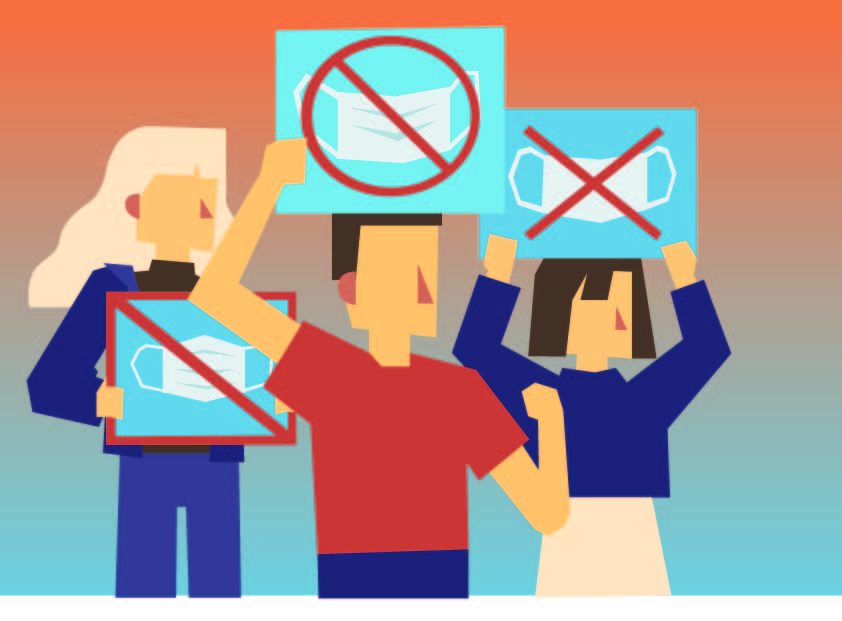 EXAMINING THE COVID-19 PROTESTS AS AN ASIAN AMERICAN

When health officials highly suggested wearing masks and when mask mandates later were put in place, I thought most Americans were going to comply. But, when I watched the daily news, I thought to myself  “Oh, what are these people protesting?” What, they are protesting … masks?

Numerous news sources such as Forbes have reported protests against mask mandates starting in mid-July. In pictures and videos, protestors can be seen lining the streets, maskless, while holding signs that spell out their frustration. Some say in bold colors, “My body my choice,” mocking the well-known pro-choice slogan, and “Masks are muzzles.” The participants, people who choose not to wear a mask, ignore local mandates and science, arguing that the government is robbing them of the freedom they have always been promised.

No matter how many videos I watch of people protesting mask regulations, I will never understand how some Americans can protest putting a piece of cloth with two elastics over their mouth and nose.

When the pandemic began, countries in Asia quickly buckled down. South Korea is an example of a nation that was able to handle the situation in a timely manner, with an abundance of testing, contact tracing, an improved health care system, and strict mask mandates.

According to the University of California San Francisco, a mask is a source control for the virus, meaning that the mask prevents the spread of COVID-19. It reduces the amount of pathogens flying out into the open when a person talks, coughs, or sneezes. When somebody wears a mask, according to Dean Blumberg, chief of pediatric infectious diseases at UC Davis Children’s Hospital, the risk of infection decreases by 65%. Therefore, because it can cut down the infection rate drastically, it is imperative everybody wears one when in public — cloth or medical grade.

When somebody wears a mask, according to Dean Blumberg, chief of pediatric infectious diseases at UC Davis Children’s Hospital, the risk of infection decreases by 65%.

I’m an Asian American, an Asian living in American culture, and because of COVID-19, I have realized differences between Western and Asian culture. Over many summers visiting various Asian countries including Japan, China, Hong Kong, Singapore, I have noticed that when in public areas, the people are generally very concerned for others’ well-being. For example, I noticed in the hotel I was at, when a staff member was sick, they wore gloves and a mask. I thought that was very respectful.

Like most who live in these Asian countries, I have been brought up with these values — respect and mindfulness for others — which I believe are emphasized in Asian culture.

One example of this application of values in personal life occurs during the annual celebration of Chinese New Years. It is the celebration of the new year on the traditional Chinese calendar. On this day, people who are married give unmarried people red envelopes filled with money for good fortune. But before I can receive a red envelope, I must wish my elders a happy new year, thank them for the money, and give them a hug. Or else, I am seen as rude and an ungrateful child.

These values play a big role in how well a country handles the pandemic.

It was not a surprise to me that a College of London survey taken in late June reported 83% of the Hong Kong population compared to 59% of Americans always wore a mask when outside the house. I think it is safe to conclude most people in Asia abided and wore a mask out of concern for others and to curb the virus. But, to my astonishment, the American people seemed to behave differently.

This lack of human decency is frustrating. The first three words of the American Constitution are “We the people,” and for good reason. Giving power to the people, I believe, is fundamental to our democracy, and has allowed the U.S to dominate worldwide. Since this country was built on the ideals of freedom, independence and individuality, these ideals have contributed to citizens’ desire to disregard certain government orders, even if they are beneficial for the well-being of the public.

This lack of human decency is frustrating.

Although I have not seen protests like these in the Bay Area, I have seen some choosing to haphazardly comply in my personal life. Walking around my Palo Alto neighborhood, some people choose to not wear a mask at all or some wear a mask below their nose or dangling off one ear.

My mom, who is a medical professional, is aware of the importance of masks, and has a strict protocol at her office, which includes letting only one patient into the office at a time and mandating the patient wear a mask at all times except during the procedure. All staff need to wear an N-95 mask and a surgical mask on top at all times as well. She believes heavy sanitation and masks are important to keep COVID-19 out of her office. “Masks save lives, they protect us,” she says.

This heavy sanitation seen in her work environment is due to her having spent the majority of her life in China and Vietnam. Maintaining sanitation in her personal and worl life is a big part of how she is able to be mindful of others.

Americans should take note of Asian values of the collective well-being of the whole population, even if they come at the cost of American individuality.